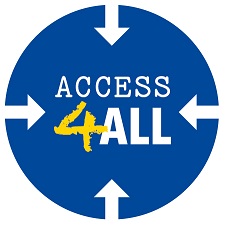 There is a growing number of marginalized youth in Europe. Throughout the last decade the youth unemployment rate in the EU was about twice as high as the rate for the total population. In 2011, Spain e.g. had the absolute highest rate of youth unemployment: 46, 4 % and Romania 23, 7% (Eurostat). The Commission has launched an action plan to reduce early school leaving of that same reason and the reduction of the number of persons at risk of poverty or social exclusion in the EU is one of the key targets of the Europe 2020 strategy. There is a wide range of vulnerable groups of young people around Europe. The financial and economic crisis is currently directly or indirectly affecting the middle and lower classes, with controversial policies for reducing the fiscal deficit, which have meant, for example, a rise in the cost of access to higher levels of training (a possible path towards social improvement and economic well-being), creating, in some European countries, newly excluded groups from Higher Education (HE.).

Inequalities in training for reasons of geographic, ethnic or social origin, and in job opportunities, salaries and incomes are critical dimensions of social exclusion (e.g., Eurostat, 2009; International Labour Organization, 2009).The development of policies, including those concerning education, that extend access to opportunities, is essential in order to combat the permanent nature of the exclusion. In this sense, within the framework of the Bologna process, the social dimension of higher education has been present since the Prague communiqué of 2001, which emphasised the need to work towards the inclusion of students and the need to promote the possibilities of mobility for all. The successive declarations and communiqués (Berlin, 2003; Bergen, 2005; London, 2007; Leuven and Louvain-la-Neuve, 2009; Budapest-Vienna, 2010; Bucharest, 2012) have continued insisting on the need to promote the social dimension in constructing and consolidating the European Higher Education Area (EHEA), and specifically, the need to create more flexible learning pathways into and within higher education as well as the provision of adequate student services (London communiqué, 2007).

Recent reports by the EACEA/EURYDICE (2012) underline this when they indicate that, despite the major progress made in European educational systems, there still remain some challenges that need to be responded to: promoting measurable set targets related to the social dimension; establishing systems to monitor the participation of underrepresented groups in HE; moving to HE policies those measures needed to assist vulnerable groups already existing in other areas in Europe. The aim of our proposal is to promote the educational and social inclusion of underrepresented groups as well as of nontraditional learners, thereby broadly satisfying one of the main priorities being called for (i.e. the improvement of the capacities of organisations active in the fields of education, training and youth, notably in the areas of strategic development, quality of learning provision, equity and inclusion, qualitative and targeted activities for specific groups) and addressing clearly one of the important features of the Erasmus+ programme: “promoting equity and inclusion by facilitating the access to learners with disadvantaged backgrounds and fewer opportunities compared to their peers” (p. 13, Erasmus+ programme guide).

This main aim is addressing 4 specific objectives: (1) to establish a map with the institutional policies for attending to vulnerable groups in relation to academic access and success; (2) to establish guidelines to be implemented by higher education organisations to promote initiatives aimed to encourage the access and successful development of students who are under-represented in universities; (3) to co-create strategies and measures promoting the access, permanence (and success) of vulnerable students and non-traditional learners at university; (4) to create a laboratory for the creation of innovative and flexible strategies in order to promote social commitment of Higher Education institutions in relation with the most vulnerable student groups. The actions and outputs linked to these objectives are presented in section F2 (project activities).

The project (ACCESS4ALL) is related to two main priorities of the Europe 2020 strategy: (1) smart growth: encouraging people to learn, creating new services that help to address social challenges and use of ICT; (2) inclusive growth: increasing the number of citizens with third level education and reducing the percentage of people in or at risk of poverty and social exclusion (these priorities are directly related to two of the five targets for the EU in 2020). 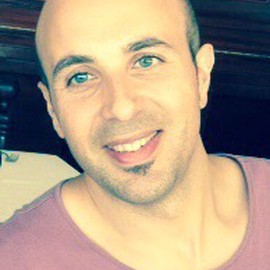 Access4All: Policies and Practices of Social Development in Higher Education 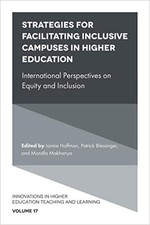 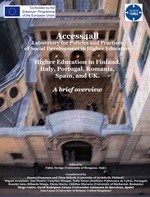